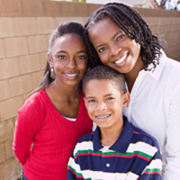 Most people have an idea that general health and dental health are interconnected. In the case of a mother and her child, however, this connection is doubled.

According to a UCSF study that was done in 2010, it was found that the children of a mother who suffered from tooth decay were at a higher risk of having a lot of tooth decay. In fact, the chance of tooth decay was doubled.

Why is this the case? First of all, it was found that mothers and children will often use the same utensils when they eat. For example, when a mother feeds her young child, she may check on the heat of the food by tasting it. She is basically transferring the decay causing bacteria in her own mouth directly into the mouth of her child. Another reason that this occurs is that the mother may have poor habits when it comes to oral hygiene. Since this is what she does, she passes it off to her children.

The biggest cause of this, however, was that mothers are not taking their children to the dentist regularly. Many of the families that were studied for this research came from low-income areas where access to offices offering pediatric dentistry was decreased.